Principal Tarsem Bahia Explained Each and Every Point 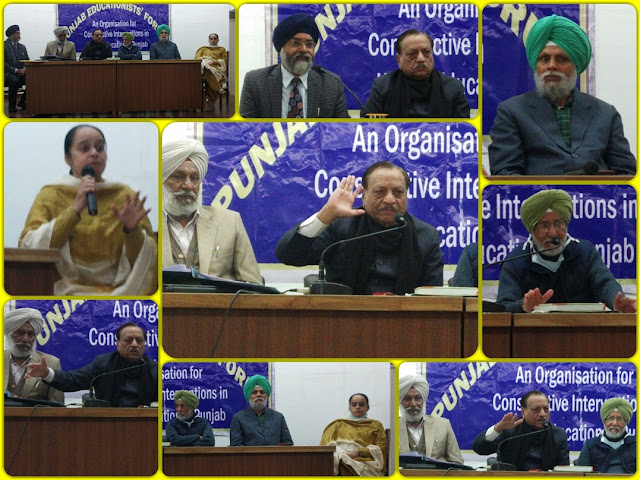 Punjab Educationists’ Forum (PEF) strongly rejects the anti-people, anti-poor, communal character of New National Education Policy. PEF organized almost dozens seminar in Punjab when proposals of NEP was introduced and we sent detailed suggestions to alter the policy to make it pro-people and pro-poor. But NEP policy was passed without taking care of the suggestions sent by different educational bodies and educationists. We have organized seminars in different parts of Punjab to highlight the damages which will occur if it policy be implemented in present form. We also sent these suggestions to Punjab government too. Taking note of our suggestions Punjab Government took note of it Chief Secretary Mr. Suresh Kumar suggested Principal Secretary Higher Education Mr. Rahul Bhandari and Special Secretary S. Paramjit Singh to call us for detailed discussions. The office bearers of PEF were invited and meeting was took place on December 15 at Chandigarh. The following important issues were discussed and we were able to convince the officials of higher education and they assured us to take care of the public interests while implementing the NEP.

A deputation of Punjab Educationists’ Forum led by Principal Tarsem Bahia (President of Forum) accompanying by Dr Surjit Singh (Secretary) and Dr Kuldip Singh (General Secretary) was invited by Principal Secretary Higher Education S. Rahul Bhandari and Special Secretary/DPI Colleges S. Paramjit Singh met on December 15 at Chandigarh and discussed various issues pertaining to higher education in Punjab and importantly the fall outs of New National Education Policy. The response and attitude of the authorities was quite constructive and sympathetic towards issues raised by us

One of the recommendations of New National Education Policy that institutions having student’s strength less than 3000 will be closed resulting which hundreds colleges existing in rural/girls colleges will be in danger, the authorities assured that the existence of rural and girls colleges will be taken care constructively.

The issue regarding the establishment of autonomous colleges without affiliation to any University was also discussed and authorities assured to maintain the status quo of already existing institutions.

The issue regarding the existence of single faculty colleges like B Ed colleges was also discussed where authorities assured to resolve it by constituting high powered committee in near future.

The forum further blasted the anti-farmer character of the three agricultural acts of Modi government and decided to lend all support to the ongoing kisan agitation in New Delhi. The forum further exposed the anti- labor character of the newly adopted labor code by Government of India which in fact meant assault on democratic rights of the working class .The forum felt that all patriotic democratic patriotic sections of people should come together to meet challenges of time. Taking serious note of these acts and policies forum feels that Centre Government is working for the safe guards and interests of Big Industrial Houses and Corporates.

The forum does demand to form a Higher Education Regulatory Commission in Punjab in tune with State of Himachal Pradesh to ensure appropriate standards of admission, teaching, examinations, research and protection of the interests of students. Because the present higher education policies of Punjab are promoting commercialization and privatization of Higher Education in Punjab which is resulting the mushrooming of Private Universities (Around 30 universities in small state of Punjab).

Protection of Democratic Governance in Panjab University Chandigarh (Senate Elections) The elections of Senate was due in the month of September 2020 but was deferred in garb of COVID-19. The VC is taking important decisions with getting it approved from the highest body Syndicate. The present working of the University is against the University Act of Punjab. The BJP led center Govt and present VC is bent upon to dismantle it by alternating it with Board of Governors. The Panjab University Teachers’ Association has been staging dharna in front of VC residence since a long and also demanding long pending CAS and holding early elections of Senate. PEF has decided to join their Dharna  to show solidarity  on December 21 at PU Chandigarh