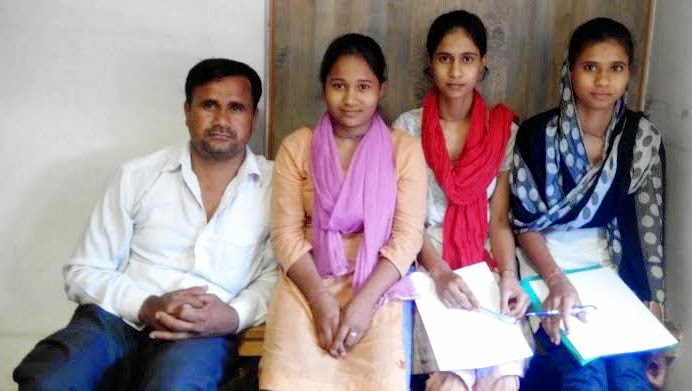 It is to bring to your kind notice the plight of three girls  Kumari Anjum, age 16 years, Km. Tarannum, age 14 years,  and Km. Saba, age  13 years, all daughter of Mohd. Daraj presently residing at Plot No. 384, Block-E, Khasra No. 297, New Ashok Nagar, Delhi-110096, who have been illegally and arbitrarily denied admission by Government Co-Ed Senior Secondary School, Vasundhara Enclave, Delhi-110096.

The said three children were earlier studying in D.S.R. Modern School  in Noida, Gautam Budh Nagar which a recognized school. The father of the said three children had to shift to the aforesaid address of New Ashok Nagar with entire family on rent because of financial and employment problems. He was also not able to pay the hiked fee of the said private recognized school.

The father of the children therefore withdrew the said three  children and got the transfer certificate from the said school. Thereafter the father of the children applied for admission of his three daughters Kumari Anjum, age 16 years, Km. Tarannum, age 14 years,  and Km. Saba, age  13 years in the Government Co-Ed Senior Secondary School , Vasundhara Enclave, Delhi-110096 in Class 9, Class 9 and class 6 respectively. It is submitted that the said school is a school nearby their place of residence. However the principal of the said school refused admission to the Km. Sabha without giving any reason. In respect of Km. Anjum and Km Tarnnum, the principal asked father of the said children to bring Address Proof, Voter I Card, Bank Account and Ration Card of the current address of New Ashok Nagar. Since the family has recently shifted to Delhi, it would not be possible to get the said documents immediately. The father of the children showed the rent agreement of the current address but the principal refused to recognize the same. It is submitted that the condition put by the principal to bring said documents for admission of  Km Anjum and Km Tarnnum in school while refusing the admission to Km. Sabha without citing any reason is illegal, unjustified and violate the right to the said three children to education  as guaranteed to them by the Art 21 and 21 –A of the Constitution of India and RTE Act, 2009.

The father of the said children also submitted the letter of Sh. Praveen Kumar, MLA and Parliamentary Secretary Govt. of Delhi, to the principal of the aforesaid school. However she paid no attention to it and ignored the same.

The approach of the school authorities is culpably negligent, arbitrary and shows that the authorities of the department are apathetic and insensible towards the rights of children. These kinds of cases are coming in routine manner where the children are denied admission on such arbitrary reasons. Some stern and reformatory actions and policy decision need to be taken by your government in this regard.

You are therefore requested to take immediate appropriate action in the matter to ensure that the aforesaid children are granted admission in the aforesaid school or any other school nearby their residence.
With regards,